PPE Seminar with Krisztina Orban, NBER, “The Inception of Capitalism Through the Lens of Firms”

PPE Seminar welcomes Krisztina Orban, NBER who will present her paper “The Inception of Capitalism Through the Lens of Firms”. Professor Orban’s main fields of research are in Industrial Organization (Productivity), Growth & Development, and Corporate Finance.

PPE Seminar welcomes Joshua Preiss, Minnesota State University who will present his paper “The American Dream after Covid-19”, a chapter from his new book Just Work for All: The American Dream in the 21st Century” (Routledge). Professor Preiss’s research is in social and political philosophy, political economy, applied ethics, and the philosophy of economics.

PPE Seminar welcomes Nicole Gonzalez Van Cleve, Brown University who will present her paper “The Criminal Justice System as a Welfare Handout: How Criminal Justice Professionals Adapt Welfare-Dependency Narratives To The World of Custody and Courts”. Professor Gonzalez Van Cleve’s research addresses the equitability of laws, the creation of racial meaning, and the “consumer experience” of criminal justice institutions.

PPE Seminar with Bernardo Zacka, MIT, “Silenced by Design: The Interior Architecture of the Welfare State”

Liberalism and its History: a Roundtable Discussion

Hosted by the Political Theory Project. All are welcome! 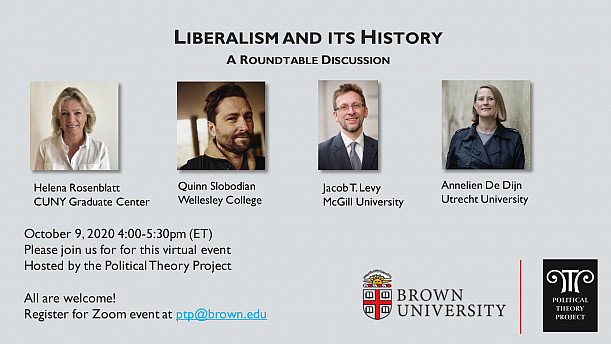 Julian Muller, University of Hamburg, “The Logic of Populism”

The Philosophy, Politics, and Economics (PPE) Research Seminar at Brown University is a workshop designed to appeal to researchers across disciplines. The PPE Seminar is sponsored by the Political Theory Project, whose mission is to foster the study of those institutions which contribute to societies that are free, prosperous, and fair.

PPE Seminar welcomes Julian Muller, University of Hamburg who will present his paper “The Logic of Populism”. Professor Muller main fields of research are political epistemology and applied ethics. Please click here for a link to the upcoming paper.

Kidnap for ransom is a lucrative but tricky business. Millions of people live, travel, and work in areas with significant kidnap risks, yet kidnaps of foreign workers, local VIPs, and tourists are surprisingly rare and the vast majority of abductions are peacefully resolved - often for remarkably low ransoms. In fact, the market for hostages is so well ordered that the crime is insurable. This is a puzzle: ransoming a hostage is the world’s most precarious trade. What would be the “right” price for your loved one - and can you avoid putting others at risk by paying it? What prevents criminals from maltreating hostages? How do you (safely) pay a ransom? And why would kidnappers release a potential future witness after receiving their money? Join us for a conversation with author Anja Shortland about this fascinating topic. Please click here for tickets.

Professor Holland studies the comparative political economy of development with a focus on urban politics, social policy, and Latin America. Her book, Forbearance as Redistribution: The Politics of Informal Welfare in Latin America (Cambridge Studies in Comparative Politics), looks at the politics of enforcement against property law violations by the poor, such as squatting, street vending, and electricity theft.

Her current book project focuses on the political determinants of the level, quality, and social response to infrastructure projects in Latin America. Other research interests include migration, crime control, and subnational governance. Her articles have appeared in the American Journal of Political Science, American Review of Political Science, Comparative Political Studies, Latin American Research Review, Perspectives on Politics, and World Politics.